Are you a new customer? Give us a call or fill out the form on the right for a free quote today. If you're an existing customer looking to access your container at our Storage Center, please give us a call and we'll be happy to schedule an appointment.Monday-Saturday: 5 a.m.–7 p.m. PTSunday: 6 a.m.–3:30 p.m. PT

Fullerton may be recognized as the birthplace of the solid-body electric guitar by Leo Fender, but did you know this suburb of Los Angeles is also known as “The Education Community”? It’s home to award-winning elementary and secondary school systems, as well as five universities and colleges. In fact, celebrities like James Cameron, Steven Seagal, and Gwen Stefani are alumni of Fullerton College.

There are nine private schools in the Fullerton area, including Eastside Christian Schools and Veritas Classical Academy — both for K–12. According to Niche.com, Rosary Academy — an all-girls Catholic school serving students in grades 9–12 — scores an impressive A+, with 92% of the students going on to attend 4-year colleges after graduation among its many pluses.

To say that you can learn virtually anything in Fullerton is an understatement. Not to mention all the employment opportunities surrounding the many educational institutions. It’s no wonder the city has been voted one of the “Best Places to Live” by U.S. News & World Report.

Storage Facilities Near Me

5370 South Boyle Ave
Vernon, CA 90058
Please note that PODS may not service all ZIP codes within the listed areas. Give us a call and we'd be more than happy to make sure we service your ZIP code.

We deliver your container -- and there's no need to meet the driver, as PODS is a contactless service. Load your container on your schedule, right in your driveway. If you want help, we can connect you with local packing and loading companies.

At-home storage gives you the flexibility you need, whether you want easy storage just steps away, or you want to take your time packing and loading.

If you need temporary storage, we'll pick up your loaded container and bring it to a local PODS Storage Centre, where it will be safe, secure, and easily accessible until you need it again.

We've got this, so you don't have to. We'll deliver your container to your new home, whether you're moving across town or across the country.* If you need to ship your car, we can connect you with one of our preferred car shipping providers who will arrange professional services in your area.

Choose the service you need 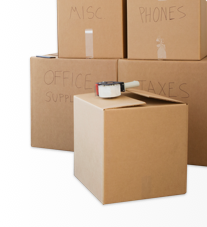